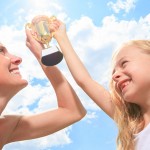 My two year old son sat at our kitchen table asking, demanding actually, more chocolate milk to drink. “No, you already had a glass. You can have some water,” I gently reply. “No! More chocolate milk!” he yelled, more insistent. “No, you can have some water,” I said more firmly. “No! CHOCOLATE MILK!” he screamed, and with that, he threw his sippy cup off the table and watched it roll across the floor. Ever defiant, he looked up and me and again demanded “More chocolate milk”. Following through with our months and months of consistent discipline trying to curb my son’s sometimes less-than-desirable behavior, I promptly got up, admonished him for throwing the cup, and told him he was going to time out. And with that, he sat down in the designated time out corner. And there he stayed for the next five minutes until I told him he could get up.

It was a miracle!

Now, don’t get the wrong idea. I’m not celebrating the fact my toddler threw a total tantrum over chocolate milk or congratulating myself for being a tough disciplinarian who put him in time out. It’s not like that. No, I am absolutely overjoyed that my son actually took direction and stayed in time out. After months and months of trying to discipline my son, this is the first time I’ve ever actually been able to get him to stay in timeout. That’s a win in my house. When I recounted this story to my husband, he was a bit confused about my enthusiasm until I got to the point where I said our son actually stayed in time out. Then he completely understood. This was definite progress for our son in terms of him listening and following direction.

Parenting is filled with a series of “big wins”. First words, potty training, all those successful milestones that parents celebrate when their children finally reach them. But those big wins are few and far between. So much of the daily grind of parenting is filled with set backs and frustration. Sometimes it gets hard to recognize the little victories, like a child who, for the first time ever, was able to actually sit in time out. It’s not exactly the win I was hoping for, but it’s a parenting victory nonetheless. It’s progress. After months and months and months of consistent direction, he’s starting to listen.

It’s the same kind of little win I felt when I finally got my son to walk holding my hand instead of tearing off like an unleashed dog into the middle of the street. When I finally got him to eat something other than macaroni and cheese for breakfast, lunch and dinner. When I told him he couldn’t get down from the table until he finished his strawberries and he actually stayed and ate them instead of immediately running for his toys on the floor. These were all moments I took for granted with my daughter, as she did them all automatically, with very little direction. But when dealing with my son, these are huge milestones in shaping his behavior. These are wins. And too often as parents, we don’t necessarily recognize our little daily victories. But once my son was out of time out, I gave him the biggest hug and told him how proud I was of him for listening to me. Now if I only I could get him to stop throwing his sippy cups in the first place. But we’re taking this one step at a time.