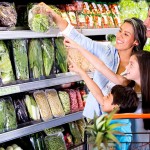 Look down at the shirt you’re wearing. Imagine new research has come out showing that the shirt’s material can cause toxic effects on your nervous system. Would you still keep wearing the shirt? Or pay an extra dollar for a shirt with non-toxic fabric? How about if it came to light that the toxins in the plastic of your baby’s carseat could cause them to have development problems…would you still buy that carseat, or go for a more expensive one that didn’t pose the same risk? In our society, people fork over more money for upgrades without thinking twice. Better concert seats, more phone storage, TV channels …we love upgrades. Except for food. The thing that powers us, that keeps us healthy and alive, is a huge area people are very reluctant to upgrade and pay an extra 20 cents for.

Organic foods have steadily been making their way into most grocery stores, and organic foods are, in every case – more money than non-organic. Sometimes a lot more money. Organic chicken at my local Costco is double the price of non-organic chicken. While some gladly fork over the extra cash for organic, many see it as unnecessary, a passing fad even. What’s the real deal with organic food? What does organic even mean?

And why is it so pricey?

I tried for three years to grow my own organic vegetables. Year one my entire garden was mowed down by giant green worms. Year two was more worms and an infestation of mites in the dirt. By year three I gave up and planted cactus. Which started dying, and I realized there were huge grubs in the soil eating the roots. I’m now contemplating a rock garden. My point is – it is not easy to grow organic food. That is why it is so much more expensive – less crop yield and a lot more work to keep them healthy and uneaten all the way until harvesting stage. But for some foods, it is very necessary that you buy them organic.

How many of you have seen the “Clean Fifteen” and “Dirty Thirteen” foods list? If you haven’t, it’s worth a look, as the list might surprise you. The dirtiest foods, in order of highest contamination level are: apples (most contaminated for five years running, and yes that means apple juice too), peaches, nectarines, strawberries, grapes/grape juice, celery, spinach, bell peppers, cucumbers, cherry tomatoes, snap peas, potatoes, hot peppers, and kale/collard greens. The cleanest foods are avocadoes, corn, pineapples, cabbage, sweet peas, onions, asparagus, mangoes, papayas, kiwi, eggplant, grapefruit, cantaloupe, cauliflower, and sweet potatoes. Can’t remember what’s clean and what’s not when shopping? Download EWGs Food Scores app for free and check as you shop!

You might be wondering – are pesticides really that bad for us? I had a family member say, “I eat non-organic all the time and I feel fine. It’s cheaper, I buy what’s cheap”. So…what are pesticides?

Pesticides are, in a nutshell, toxic chemicals designed to kill living organisms – insects, weeds, fungi. Yep. Spray the pesticides on the plants, less trouble with things destroying your crops, more food to sell.

However, researchers around the globe agree that pesticides pose health risks, and a lot of the pesticides used in America have been completely banned in other countries for years. Neurotoxins. Developmental and reproductive toxins. Carcinogenic effects. Hormone disruption. As of now there are 165 different pesticides used on produce. The problem is, like my family member, people do not see immediate results of pesticides on their bodies. It might take years, decades, to accumulate and show effects. But every year new research comes out showing the effects of pesticides on the human body, often showing that previously thought “safe” levels no longer are.

The good news? People, and farmers, are becoming more aware, and it is now possible to buy almost every type of food organic. Organic food sales have tripled in the past ten years, up to 15 billion dollars last year, plus there are many foods, like the “clean list” above, that have very low pesticide levels and can be bought non-organic without any risk.

Now, organic does not mean nothing has been sprayed on them. It means they haven’t had any synthetic chemicals sprayed on them or put into the soil. Plant-based or natural insecticides are fair game. There might also be pesticides in the soil from previous non-organic crops, or even air-borne contaminants (if the crops are right next to a freeway for example) that can make their way onto the food.

So, just as the effects of not wearing sunscreen or not exercising regularly may not show up until you’re middle-aged, the true effects of consuming pesticides may not show up in your system for years to come. Which means that now is the time to act, now is the time to start changing what you eat, especially the “dirty” foods. In my local grocery stores, organic baby foods easily outnumber non-organic baby foods, parents are more than willing to shell out an extra few cents to ensure their child is getting the best possible food (which, organic baby food is imperative as there currently is NO RULE in the U.S. for pesticide residue in baby food – yeah, scary!). You have to believe that your body and your health are just as important as your child’s, and realize that in twenty years, those extra few dollars spent on organic food won’t matter, but years of eating pesticide-laden food very well could.

For more information, check out WhatsOnMyFood.org or EWG.org.