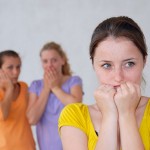 In your heart of hearts, you know your child is about to make a ghastly mistake but there’s no talking her out of it. The man she is determined to marry … well, let’s just say he gave you the heebie-jeebies from the get-go.

No, parents are not mind readers and at times they get it wrong, but when you’ve been around the block as many times as a Baby Boomer has you do acquire something of a sixth sense.

So what do you do? Tell her, flat out, you think she’s making a horrible choice? Forbid her to marry him? Well, she is ‘of age’ so you can’t legally do that. Threaten to cut her out of the will? (Oh, that’s right, you haven’t gotten around to the will but that must be on your to-do list.) Give her your blessings even though you are plagued with misgivings about this match up?

Back it up a decade or so, long before marriage became a topic of conversation. Your child wants to quit a sports team even though he is very good at it. Do you say, sure, fine, whatever, even though you know he is going to regret it? Your child refuses to go to college even though she has the grades and have been accepted. What do you do? Verbally torture her until she succumbs?

When a child is young and dependent in all ways on his parents, it’s a lot easier to circumvent, derail and side-step what you know, as an adult, is a bad choice on your child’s part. When they get older, not so easy.

You HAVE To Do This!

Is forcing your child to take violin lessons or ballet a good idea?

Forcing never works, in my experience, and I am experienced in this department to the nth degree.

I don’t like being told what to do and never did but I did go along with the program when I was a kid because I wasn’t all that defiant and if my parents were insistent on something (which they usually weren’t) I capitulated and did as told.

My children were another story altogether probably because my husband and I allowed them to have a voice. They were permitted to disagree with us, which they quite enthusiastically on a regular basis.

On the other hand, sometimes, what may appear to be a mistake to you isn’t. Kids aren’t always wrong, even if they’re quite young. If they say ‘no’ and have a valid reason, and sometimes even if they don’t, consider they might be right and you are mistaken.

Some children are mature far beyond their years and have an uncanny sense of the path they’re on. They have a firm grasp on what and who they are and what they want to do and pursue. You may have one of those headstrong kids yourself. They will not be coerced. Now that doesn’t mean you can allow them to run roughshod over you. Find a middle ground everyone can live with.

Two of my kids could not be pushed or pressured. The other one was easier to manipulate. He could be figuratively shoved and cajoled but we only resorted to this when he was categorically about to make an all-too-obvious mistake and there were no if, ands, buts about it.

Wave the White Flag. I Surrender

At times there isn’t a damned thing a parent can do when their child is on the precipice of making a monumental mistake. A lot depends on the age of the child and how much control and influence you exert over them. A 10-year-old is probably easier to back down than a 17-year-old. Sometimes you have to take a backseat and wait for the implosion or explosion. It’s painful but it’s also a necessary part of growing up, both in respect to the child and his parents.

And even when there may be something you, as the parent, can do to thwart the choice your child is about to make perhaps you shouldn’t take action. As long as the choice doesn’t have a potentially fatal outcome, kids should be allowed to make mistakes, as painful as it is to watch from the sidelines, because they will learn from them. Falling flat on your face every once in a while is a good reality check, for youngsters and adults.

Years down the road, when your child is an adult, as my three are, there may come a day when the child tells you he appreciates what you did or didn’t do in a specific situation. And then again, he may never refer to it at all.

However, as long as things turned out well in the long run, and the kid is not on the FBI’s Most Wanted poster in the post office, you can rest assured you did the best you could, you helped and intervened and pulled rank when you needed to yet intuited when to back off and let the child make a decision even though you knew the outcome was going to be bad and not what the child naively assumed it would be.

Pick yourself up, brush yourself off and start all over again. Most people are remarkably resilient.

P.S. Don’t tell them “I told you so.” If they’ve royally screwed up, they know it. You don’t need to throw in your acerbic two cents.