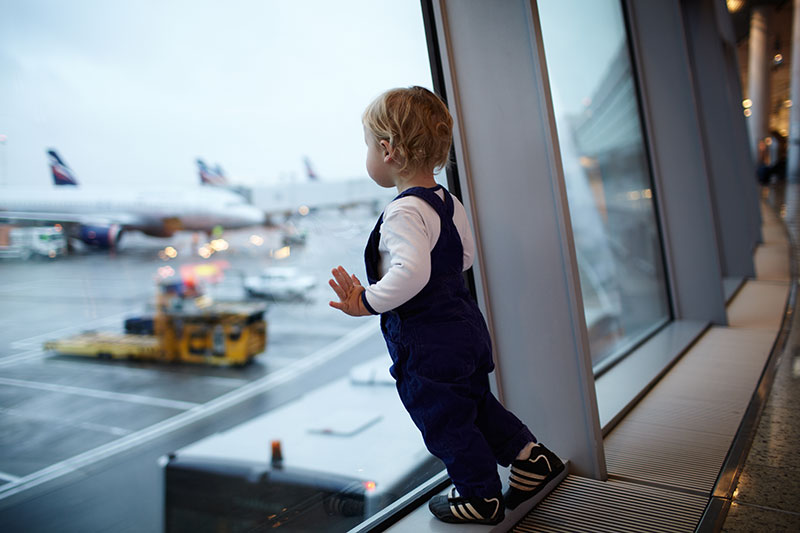 When my husband and I starting discussing wanting to take our kids to Disney World, the first decision we had to make was whether we wanted to fly or drive. While both options had obvious pros and cons, ultimately, a two hour flight seemed much more preferable than a 14 hour drive. Still, we had to wonder, what would it be like to fly with a three year old and nine month old? Could we handle flying with two small children?

When travelers imagine the worst possible scenarios that can arise during airline travel, they typically think of unreasonable seat recliners, bare feet out in the isle, and screaming, crying babies. I recently heard a friend remark that he wished airlines offered child-free flights so that people traveling without kids could enjoy some peace and quiet. By the way, this friend doesn’t have any children.

So what does it take to successfully survive a flight with a small child? Well, the answer largely depends on your child. My daughter has had a jet-setter personality since the day she was born. Now, at the age of four, she handles airline travel better than most adults. Shoes off at security, boarding pass in hand, iPad loaded with the necessary games and cartoons – my daughter makes flying with kids look easy. The first time she walked on a plane she strolled on like it was her own private jet, looked in the cockpit to say hello to the pilots, promptly took her seat, buckled her seat belt, and politely asked the stewardess for a glass of apple juice. If you have an easy going child who’s up for anything, flying with small children is a breeze.

And then there’s my son… While I don’t condone my friend’s previous comments about child-free flights, my son is definitely the reason why people think childless flights are a good idea. For starters, because my son is under the age of two, he can fly for free on most airlines if he sits on my lap. One look at the cost of air travel these days, and not paying for a member of your party sounds awesome! What that also means is that I’m now responsible for handling, corralling or wrestling him, all within the tiny confines of my tiny seat, for the entire flight. And while strategically downloaded games and television shows can keep my three year old daughter occupied for hours, the same can’t be said for my son. I’ve now flown with him twice and both of those were “special” experiences for everyone on our flight.

Are there ways you can make flying with children easier? Obviously, I recommend the preloaded iPad or tablet, and make sure you practice with the headphones days BEFORE your trip. Snacks are always a must and can often calm an incident before it turns into a meltdown. Games, toys and favorite stuffed animals are good – just make sure you don’t leave them on the plane. Try to pick flights that fit into your child’s regular daily schedule, although this did nothing to help us when our plane was delayed eight hours due to mechanical failure and both my children ended up napping on the airport floor.

And bring a change of clothes – and not just for your child, but perhaps for you as well. When my son had an infamous diaper blow out at 30,000 feet, I was completely prepared with wipes, diapers and change of clothes for him. What I was not prepared for was that I was holding him in my lap when the blowout occurred… And while I could get him all nice, clean and fresh for the rest of the flight, I can’t say the same for myself…

So the question becomes when you’re contemplating flying with small children, just how brave are you?