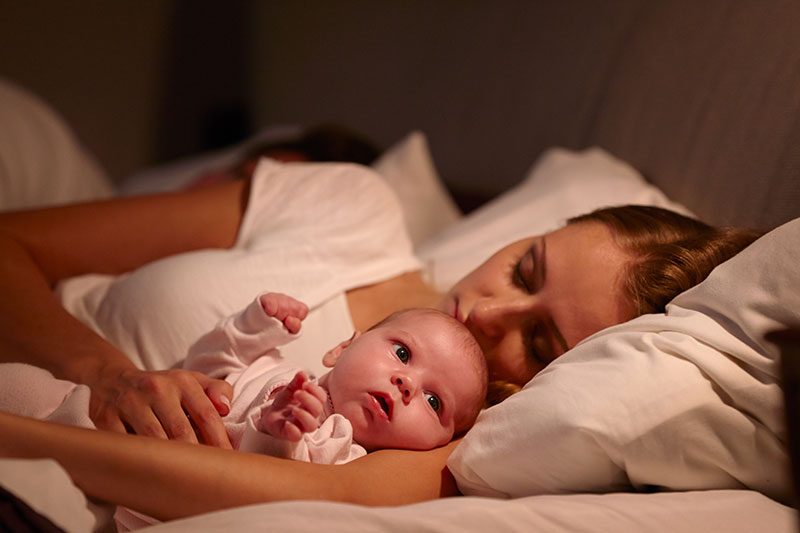 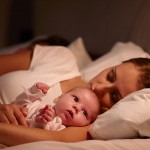 It makes me very sad to read Facebook posts saying how someone is “sleep training” their child. They often say how it is harder for them than their child, but they know it is for the best. The child has to “learn” to sleep on their own. I just can’t understand this logic. We do not teach our children to swim by throwing them into a pool. Why do we think they will learn to sleep by being left alone in a dark room? We acknowledge that adults have needs beyond hunger and a dry butt, but for some reason we think babies should be content as long as these needs are met. A baby apparently can’t be lonely, or simply have trouble falling asleep and need some company and soothing.

My parents had the same thoughts when I was a child. I did not agree with their opinion that I should sleep in my own bed, so I slept in what was basically a cage. I remember being in my crib, looking at my brother in his crib. He was more easy going than I was as a child, so he stayed where he was put. When I hear about parents locking their children in their room so they will stay there all night, I can’t help but feel sympathy for the child. I am not sure why it has become popular in our culture to view children needing their parents as a bad thing. Instead, it has become a badge of honor it seems to have your baby not dependent on you as soon as possible, without questioning if it is in the best interest of the child.

This is not how it has to be though. It is possible to have your child learn to sleep independently without forcing them to do it. While I am by no means an expert in child development or safe sleeping practices, I have done a lot of reading about it over the course of having three children, as well as benefiting from the wisdom and suggestions from other parents. Here is what learning to sleep has looked like for my children so far.

Before my oldest was born, I had done some reading on parenting. If I want to know about something, I get a book, or ten books, about it. One of the books that I read was by Dr. William Sears, on attachment parenting. Due to memories of my own childhood experiences, I knew I did not want to leave my baby to cry himself to sleep, but I wasn’t sure what else to do. After reading the book, one of the things we got before my son was born was a co-sleeper. For the first several months, I would put him in his crib after nursing him to sleep, and then when I was ready for bed, I would get him and nurse him in my bed and then slide him into the co-sleeper. When he woke up, I would nurse him back to sleep and he would stay the rest of the night in bed with us. This worked well until he started teething. Then he just didn’t sleep, or at least it seemed that way. I couldn’t move him without him waking up, so I would just get him to sleep in our bed. When he was a little over a year old, I started getting him to sleep on his crib mattress on our floor, and then he would get in bed with us whenever he woke up later. When he was about 2, we started getting him to sleep in his own bedroom, since his little brother would be born in a few months. It went pretty well, and over last few years, he gradually lengthened how long he stayed in his room at night. He now sleeps all night in his room unless he is sick or occasionally just can’t get back to sleep in the night.

When my second son was born, I anticipated that things would go pretty much that same as they had with my oldest. That wasn’t quite how things went though. He was a very light sleeper, so I could never manage to get him moved into the co-sleeper without waking him up, so he slept with us all the time until he was old enough that I started getting him to sleep on the mattress on the floor…where he was still sleeping until a week ago. We were planning to move last year, and we didn’t really have a bedroom to move him to at our old house, so we didn’t try to get him in his own room before our daughter was born. After we did move, he was very opposed to sleeping either in his room, or in the bunk beds in his older brother’s room. We didn’t push him to move, but we would occasionally ask him. He finally decided recently that he would be willing to try it if we put fish in the fish tank and put it in his brother’s room. He still comes into our room, sometimes at midnight, sometimes at 6 am. Honestly, I miss snuggling with him, even though I know he needs to transition to his own room. He is the cuddliest of my kids, and always wants to sleep with my arm around him, even though with the baby on the other side of me, that is sometimes anatomically impossible.

During the worst of his struggles with sleeping, I discovered the Nurshable blog, and through that the Facebook groups facilitated by the blog’s founder. They were very helpful in saving my sanity on the nights when he was awake every hour, and it gave me someone to tell about the night when he didn’t fall asleep until 2 am, after I was walking him around the driveway in his carrier. They didn’t tell me to put him in his bed and walk away. They told me about their children that had been similar to him and that now slept independently. They made it ok to have a child who didn’t sleep, and to still support him in that. In our society, it is not considered normal to wait until your child is ready to sleep independently, so having support is crucial to making it through the sleepless nights that sometimes accompany that decision.

Since my younger son still wasn’t sleeping well when his sister was born, I wasn’t anticipating her sleeping well either, but I was surprised again. She is a great sleeper. We did have trouble getting the boys to sleep for a while as they adjusted to having a little sister, but now they all go to bed pretty easily. We snuggle together in our bed at bedtime and read stories, then we move the boys to their beds after they are asleep. Our daughter stays in our bed with the video monitor on her.

Some basic precautions make sure that the baby is safe sleeping with us. I have gotten used to sleeping with long sleeves on in colder weather since I don’t have the cover pulled up very high with a baby in bed with me. When I had gallbladder surgery, I only took ibuprofen afterwards so that I would be alert enough to take care of the baby. I make sure the baby sleeps on opposite side of the bed as her older brother when he comes into our room in the night. It has worked for us, and similar arrangements have worked for many other families. I hope other families will consider teaching their children to sleep through supporting them through the times when they can’t fall asleep on their own, so that they can all enjoy the day when they are ready to sleep independently.

Resources:
The Baby Sleep Book: The Complete Guide to a Good Night’s Rest for the Whole Family (Sears Parenting Library)

Sleeping with Your Baby: A Parent’s Guide to Cosleeping 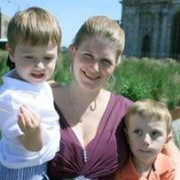