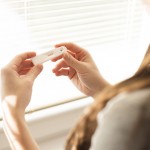 What does a ‘stealth’ or ‘cryptic’ pregnancy mean?

It means a pregnancy a woman is unaware of.

The TV show “I Didn’t Know I was Pregnant” features women who didn’t realize they were expecting until they delivered an eight-pound baby in the loo. Surprise!
How is that possible?

It happens although the majority of pregnant women are abundantly aware of the baby they are packing, who zealously kicks them in the ribs in case they should forget. For them, there is no mistaking pregnancy for anything other than what it is.

Interestingly, some of the women who have ‘stealth’ or ‘cryptic’ pregnancies are not newbies to the pregnancy game. They’ve been pregnant before and know the signs. But, for whatever reason, their bodies did not produce the typical pregnancy symptoms. Some declare they never stopped menstruating and never felt fetal movement. They are symptom-free for the most part.

Yes, some women deny they are pregnant, particularly teenagers who just wish it would go away, but denying a pregnancy is not the same as not realizing one is pregnant.

According to The Huffington Post and Marco Del Giudice, a cognitive scientist at the University of Turin, there may be biological reasons why the expectant mother truly did not know she was with child.

When a woman is pregnant, she emits a hormone called HCG or human chorionic gonatropin. When a female takes a pregnancy test and it is positive that’s because of HCG. Some fetuses do not produce a significant amount of HCG, resulting in a negative pregnancy test outcome. The reason for sub-normal amounts of HCG production is linked in part to the mother’s stress level, according to Del Giudice.

Just as a woman’s body and brain can convince her she is pregnant, resulting in a hysterical or phantom pregnancy, a body can do just the opposite and persuade a woman she is not expecting when in fact she is.

Those Cues Most Pregnant Women Get

Many women know within weeks they are pregnant because they miss a menstrual period, are nauseated and vomiting or generally feel off-kilter. Some women develop food aversions early in their pregnancy. They can’t stand the smell of coffee or onions or the taste of foods they once loved. This is one of those early tip-offs a woman is expecting and it may be the body’s way of telling the woman not to eat or drink certain things while pregnant.
When a woman has a stealth pregnancy she is not getting these cues, probably because the fetus’s HCG levels are puny, and may continue to drink alcohol or eat foods pregnant women should avoid.

Why is the Fetus Laying Low?

Del Giudice cites several examples why a fetus does not make its presence known by emitting recognizable amounts of HCG.
The body knows when a woman is severely stressed so it is to the fetus’s advantage to ‘lay low,’ so to speak, giving it a better chance of survival. Awareness of her pregnancy may compound the woman’s stress so remaining oblivious to her condition lessens the chance of miscarriage. It is easy for the woman to remain unaware of the pregnancy because she is not experiencing any pregnancy indicators.

The human body is remarkably savvy and self-protective, and this includes the fetus a woman is unknowingly carrying. Survival is the name of the game.

Because a ‘stealth’ pregnancy utilizes limited amounts of the mother’s resources this, in fact, improves the fetus’s chance of survival. Del Giudice believes the fetus senses danger and becomes adaptive, striking a deal by demanding little, which increases its chance of being born.

He contends this is an adaptive pattern of ‘forced cooperation’ between the fetus and its mother because the mother must survive in order for the fetus to live. The fetus has a better chance of enduring if the mother reduces her investment in the pregnancy and maximizes her odds of surviving and reaching delivery.

In some situations, it is beneficial to a pregnant woman to not have the characteristic signs of pregnancy. This is especially true if she is dire circumstances, living in a war ravaged country, the victim of famine or poverty or submersed in some other kind of highly stressful situation – dealing with death, divorce, etc. – none of which is the ideal situation for pregnancy.

Because she isn’t sidelined by pregnancy sickness, this conserves her energy and she is able to eat any kind of food and continue functioning. She does not worry about the fetus and its health because she is unaware of it, which is one less stressor she has to deal with.

Additionally, a stealth pregnancy reduces the cost of pregnancy, which can be a burden, because the mother receives no medical care, and it also reduces the ecological aspects, such as lack of mobility or dependence on a mate or kin, because the woman does not get large nor is she felled by sickness and require assistance.

If your neighbor tells you she just gave birth to a full-term baby and had no idea she was pregnant, no, she is not delusional or psychotic. Bizarre, but, yes, it happens.